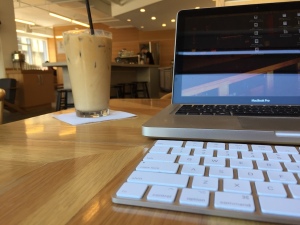 First of all, not tipping is typically not an option, unless you’re at one of the big coffee chains. They tend not to promote tipping and it’s rare to see a tip jar at one of the corporate coffee places. And if you pay by plastic, there’s not even an option to provide a tip, so you need to tip in cash.

(Plus, you should try to tip with cash rather than plastic anyway. No point in paying extra interest when you don’t have to.)

I’ve visited seven different coffee shops in the last two weeks and I’ve seen seven different forms of payment and tipping. Some are using the Clover or Square payment portals, and they offer you a screen where you can choose 15%, 18%, or 20%. Others give you dollar amount choices, $1, $2, and $3. And still other places only accept cash and won’t take plastic because we live in the 19th century; they will accept beaver pelts and chickens in trade, however.

They’re providing you a service, especially at a specialty coffee shop, and we live in a society that tips its service people. These people, as well as servers, bellhops, and delivery drivers, provided you a service, so you should tip them.

So if you don’t tip your servers and baristas, you need to eat at home. Or stick to ordering your food from a clown’s mouth.

What a Real Barista Thinks About Tipping 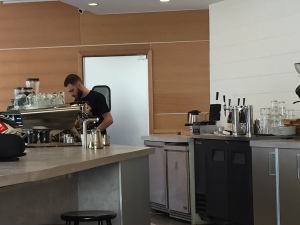 I spoke with Matt Ventura, a barista at Deeply Coffee in Downtown Orlando. He’s been a barista for five years, working in three different coffee shops. This is his full-time job, although he also runs social media for the Black Bean Deli, a local vegetarian restaurant.

“I love being a barista. It’s fun,” said Matt. “I love the interactions and I feel like I do just as much work as a bartender, except for some reason, the expectation to tip isn’t there. I’m a bartender of the day, but we get tipped less often.”

Matt prefers the $1, $2, $3 tipping screen over the percentage because the ticket sales are low. He says it’s ideal for a restaurant, where a meal price can be $10 – $15. Then the percentage option is better.

When I asked Matt what should people tip, he was nicely diplomatic about it. “There can’t be a definitive answer. Tipping is the extra value the customer feels we added to their experience.”

In other words, if you’re getting a basic coffee — or as I had, an iced latte — there’s not much to it. I’ll still leave a tip, but this is the bartender equivalent of pouring a beer. But if you get extra shots and alternative milk and all the special add-ons — half-decaf, organic soy milk steamed to 187 degrees in a pre-warmed mug, served on a satin pillow and carried by Tibetan monks whose feet have never touched concrete — and your spending as much as $6 – $8 for a drink, give them a tip.

Matt estimates that roughly 50% of the people who visit the shop actually leave a tip.

Remember, in the indie coffee shops, they’re not built like a corporate coffee place. It’s a small business and the baristas who work there take their craft seriously. They have set a high standard, and they’re constantly working to meet and exceed it. I’ve seen baristas throw away an espresso shot because it wasn’t perfect. Rather than serve a sub-standard espresso shot, they’ll dump the offending shot down the drain.

As Matt said, “We’re not just passing out stuff that’s ‘okay.’ You came in here to get something specifically crafted for you; we’re not just giving you something that’s just good enough. There’s a reason it’s called craft coffee.”

Bottom line: When you visit a coffee shop, tip your baristas. This is part of the accepted social contract in this country, and it’s the way we operate. If you don’t want to do it, no one will make you, but remember that this is how baristas (and servers, drivers, and bellhops) make their money. If you can’t spare $1 for someone who takes special care to make you a perfect cup of coffee, then stick to places where you can get coffee for $1.